For information about the 2022 Trans-Asia Graduate Student Conference 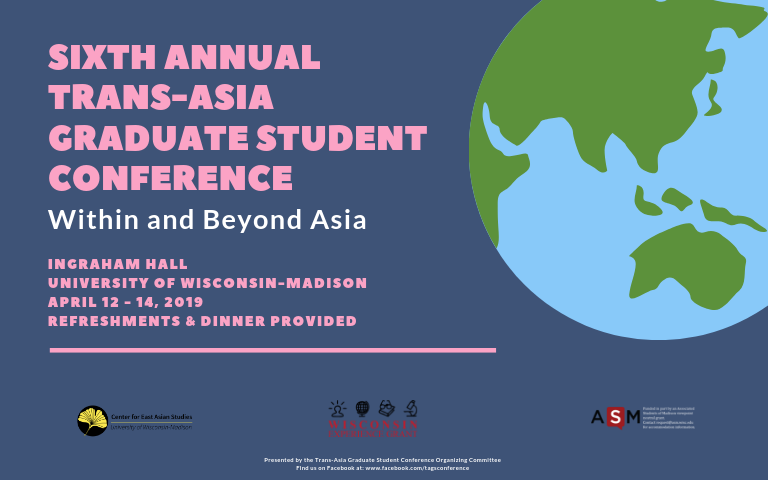 Within and Beyond Asia

We are pleased to announce the sixth annual Trans-Asia Graduate Student (TAGS) Conference to be held at the University of Wisconsin-Madison on Friday, April 12, 2019 – Sunday, April 14, 2019. The aim of this conference is to facilitate greater communication among disciplines, approaching Asia from multiple viewpoints. Participants will have a valuable opportunity to share work and receive feedback from peers and professors, as well as to gain insight into recent developments in Asia-related research across various disciplines.

The theme of the conference this year is “Within and Beyond Asia.” This year’s conference aims to invite critical examinations into the past and present of “Asia” that bridges local and global, and transcends regionalism and nationalism. The theme speaks to the recent paradigm shift of Asian studies in general, driven by the increasing exchange of bodies, ideas and capitals that move within and beyond various forms of conventional borders. Therefore, our goal is to open up a broader horizon for reimagining different “Asias” in the global context. Taking the participants’ specific fields of study as a starting point, we want to look for various opportunities of transregional and transdiscipline conversations and cooperations.

ANTI-ARCHIVE:
RUPTURE, REPURPOSING, AND THE CHRONOPOLITICS OF RULE IN PHNOM PENH, CAMBODIA

Dr. Erin Collins is a human geographer. Her work focuses on the political economy and cultural politics of transformation in Southeast Asian cities. Her current research looks at how people claim and defend space in Cambodia’s capital city of Phnom Penh, in and through moments of political, social and economic remaking. Professor Collins has recent publications in Environment and Planning and Development and Change. In the School of International Service, she teaches courses on Geographies of Uneven Development, Critical Social Theory, Development in Theory and History and Qualitative Methods for Studying the City. In her research and teaching Dr. Collins draws on post-colonial, critical race, feminist and global urban theory.

This speaker is invited by the 6th Trans-Asian Graduate Student Conference as keynote speaker. The Center for Southeast Asian Studies is the co-sponsor of this event.

The outlandish actions of the sixteenth century Chinese maverick intellectual Li Zhi (1527-1602) shocked contemporaries. A retired Confucian official, he moved into a monastery, shaved off his hair in conformity with Buddhist practice, but grew a long beard and violated monastic codes by eating meat and consorting with women. His writings too proved scandal: in them he flouted Confucian orthodoxy by overturning established judgments and excoriating and publicly humiliating high officials. His writing style abounds in paradox, irony, and contradiction, rhetorical flourishes that cause readers to stand still in their tracks and wonder “Did Li Zhi really mean this?!” My talk addresses the question of whether Li Zhi’s judgments function primarily as authoritative or provocative. Did he aspire to promote a counter-dogma to state-sanctioned Neo-Confucian orthodoxy, or to promulgate a method of incessant questioning, skepticism, and doubt? The talk focuses on two texts, A Book to Burn (Fenshu), one of the most influential books by Li Zhi, and “Conversations in the Oak Forest” (Zuolin jitan), authored by one of Li Zhi’s most outstanding students, Yuan Zhongdao. The latter text, rendered in dialogue form, provides an account of Li Zhi’s pedagogy that corroborates the view that Li Zhi’s goals were more provocative than doctrinal. 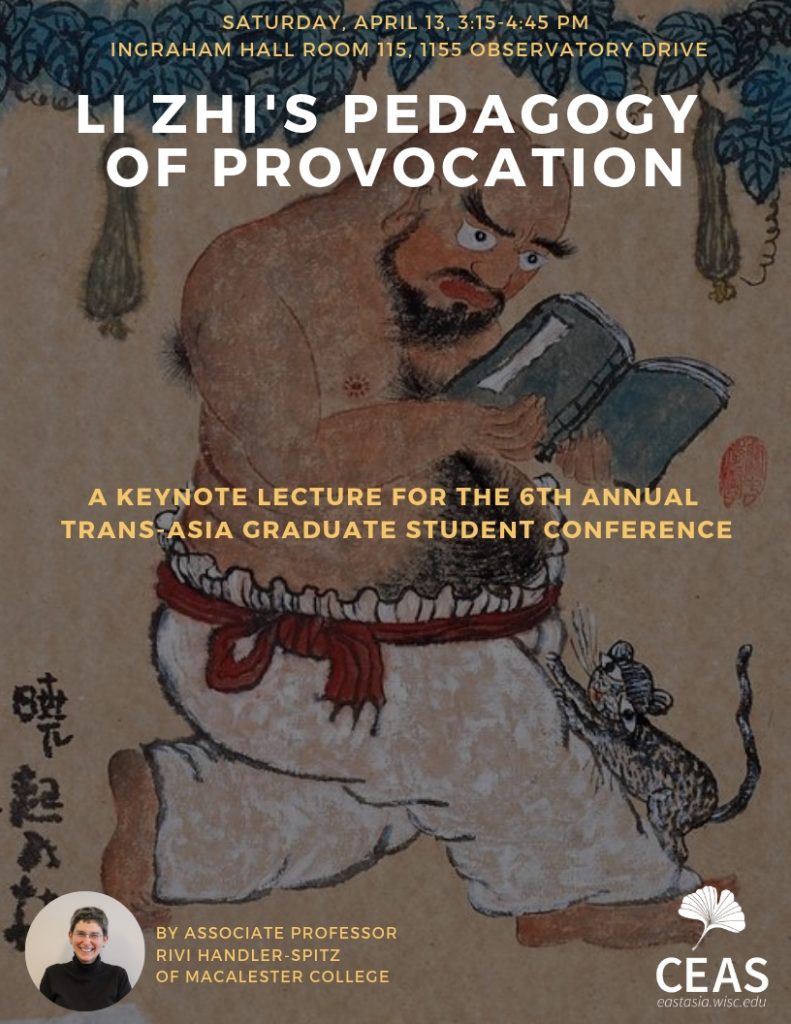 Rivi Handler-Spitz is an associate professor in the department of Asian Languages and Cultures department at Macalester College. She holds degrees in comparative literature from the University of Chicago (PhD) and Columbia University (AB). Her monograph, Symptoms of an Unruly Age: Li Zhi and Cultures of Early Modernity (University of Washington Press, 2017), analyzes writings by the late-Ming Chinese radical intellectual Li Zhi (1527-1602) in the context of contemporaneous Chinese and European social, material, literary, and intellectual history. Points of comparison include Shakespeare, Montaigne, and Cervantes. Together with Haun Saussy and Pauline C. Lee, Handler-Spitz co-edited a volume of translations from Li Zhi’s writings, A Book to Burn and A Book to Keep (Hidden) (Columbia University Press, 2016). In 2018 she drew and published her first article in graphic-novel format in Inside Higher Ed. She is now studying recorded conversations between masters and disciples as well as co-editing a collection of critical essays on Li Zhi, titled The Objectionable Li Zhi: Writing, Virtues, and the Social World in Sixteenth Century.

“Singapore’s Multiculturalism: Ethnography on the National Museum of Singapore”

“Immigrants or Loyalists? Attitudes of Chinese Emigrating to Southeast Asia after 1644 towards China”

“Improving Disaster Preparation, Response, and Recovery in Nepal and Japan”

“The Geography of Song: Place, Identity and Practice of ‘Named Melodies’ in Southwest China”

“Resisting Bandung? Taiwan’s Struggle for Legitimacy in the Rise of the Asian Peoples’s Anti-Communist League, 1954-57”

“Networks of Rulin waishi: Making a Case for the Use of Software-Based Visual Reading Aids”

“What to Eat? Whose Taste? – Exploring Taste in Zhang Dai’s Tao’an mengyi (Reminiscences in Dreams of Tao’an) and Xihu mengxun (Search the West Lake in Dreams)”

“Space and Sanctity: A Study of Mogao Grottoes Cave 172”

“Auspices from Nature: Re-direction in Understanding Auspicious Images at the Qing Court”

“Stress-Driven or not: From the analysis of Metrical, Syntactic and Musical Features of Pentasyllabic Yuefu Poems”

“During This Endless Night”: Su [spending the night] in Du Fu’s poetry”

“Longing for Paradise: A Genealogy of Penglai in Du Fu’s Poetry”

“The Role of L2 English in L3 Chinese Learning”

The Trans-Asia Graduate Student Conference Organizing Committee would like to express our gratitude to the people and organizations that donated time, money, resources, and energy. The conference would not have been possible without their dedication and generosity.

We are extremely grateful for generous financial support from:

Special thanks go to:

Last but not least, we would like to thank our panel moderators for their time and valuable input!