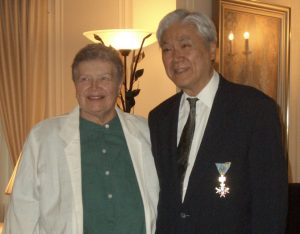 The Akira and Sharlie Miura Memorial Scholarship for Japanese and ESL Studies has been established by their surviving children, Asa Miura and Hana Miura.

Professor Emeritus Akira Miura died at the age of 92 on October 22, 2019, in Madison. With his passing, Japanese language education in the U.S. lost one of its pioneers who contributed enormously to shaping the high quality of proficiency-based Japanese language teaching.

Professor Miura joined the Department of East Asian Languages and Literature of the University of Wisconsin-Madison in 1970, was promoted to professor in 1984, and retired in 2002. He played a vital role in shaping Japanese language pedagogy in the U.S. At the time when grammar/structure-based teaching was prevalent, Professor Miura was a proponent of situation-based, proficiency-based approach. He was so well known in the field that many graduate students specifically came to UW-Madison to study and be trained by him. Many of these graduates are now teaching at major universities in the U.S. and Japan, and his presence greatly contributed to making UW-Madison’s Japanese program one of the best in the country.

Professor Miura’s research involved delineating linguistic and cultural differences as reflected in the meanings and usages of words. He authored and co-authored many books, including An Integrated Approach to Intermediate Japanese, which became the standard text in many Japanese language programs world-wide.

Professor Miura’s wife, Charlotte (Sharlie) Miura, passed away on September 2, 2016 at 85 years of age, on the other hand, was a dedicated English as a Second Language (ESL) Instructor at Madison Area Technical College (known as Madison College today). She was born in Pennsylvania but spent time in Germany, Japan, and New York City and finally settled in Wisconsin in the 1970s with her family. During her tenure at MATC, which spanned three decades until her retirement in 2002, she touched the lives of many students and colleagues alike.

This Fund will be used to provide an annual scholarship to an undergraduate student, with a preference for an underrepresented student when possible, who is studying Japanese or ESL in the Departments of Asian Languages and Cultures and English respectively. Each year the Fund will alternate between an outstanding student with a strong connection to the field of Japanese language instruction in the Department of Asian Languages and Cultures and an outstanding student with a focus on ESL instruction in the Department of English.

If you wish to contribute to this Fund, please make donations by following this link.