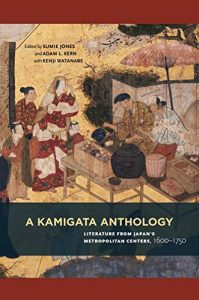 Available for purchase at the University of Hawaii Press and for pre-order at Amazon.

This is the first of a three-volume anthology of Edo- and Meiji-era urban literature that includes An Edo Anthology: Literature from Japan’s Mega-City, 1750–1850 and A Tokyo Anthology: Literature from Japan’s Modern Metropolis, 1850–1920. The present work focuses on the years in which bourgeois culture first emerged in Japan, telling the story of the rising commoner arts of Kamigata, or the “Upper Regions” of Kyoto and Osaka, which harkened back to Japan’s middle ages even as they rebelled against and competed with that earlier era. Both cities prided themselves on being models and trendsetters in all cultural matters, whether arts, crafts, books, or food. The volume also shows how elements of popular arts that germinated during this period ripened into the full-blown consumer culture of the late-Edo period.

The tendency to imagine Japan’s modernity as a creation of Western influence since the mid-nineteenth century is still strong, particularly outside Japan studies. A Kamigata Anthology challenges such assumptions by illustrating the flourishing phenomenon of Japan’s movement into its own modernity through a selection of the best examples from the period, including popular genres such as haikai poetry, handmade picture scrolls, travel guidebooks, kabuki and joruri plays, prose narratives of contemporary life, and jokes told by professional entertainers. Well illustrated with prints from popular books of the time and hand scrolls and standing screens containing poems and commentaries, the entertaining and vibrant translations put a spotlight on texts currently unavailable in English.

“A Kamigata Anthology brings together a scintillating array of popular literature from the Kyoto-Osaka region during the early Edo period. Few readers will fail to be surprised by its range or to delight in the verve of the translations, every one of which is an illuminating joy.”

“This long-awaited volume is full of lively translations that span an impressive variety of literary genres. The abundant use of images is particularly effective in bringing the works to life and demonstrating how narratives, drama, and poetry were consumed through an interplay of different media. It is a wonderful resource for not only academic specialists in premodern Japanese literature and history, but also anyone interested in Japanese popular culture, visual media, gender and sexuality, and the broader study of literary form and genre.”