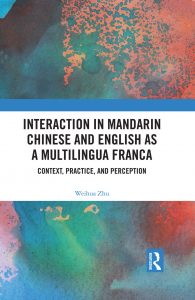 This book provides an overview of previous research on the pragmatics of Chinese and English as a multilingua franca in multilingual contexts. It argues that context is socioculturally shaped, interactionally constructed, and personally related. Context can influence and be established by the practice and perception of communicative acts.

This book also combines the proposed model with the discursive-interactional approach to uncover the interplay of context, practice, and perception of extended concurrent speech for strong disagreement by native Chinese speakers in spontaneous conversations in Mandarin and English as a multilingua franca.