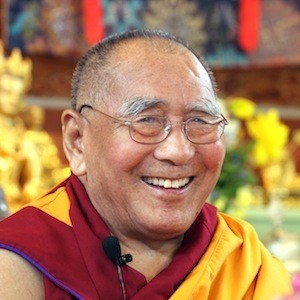 Geshe Lhundub Sopa passed away on August 28, 2014, at the age of 91 (92 by Tibetan reckoning) in his apartment at Deer Park Buddhist Center in Oregon, Wisconsin. He remained in clear light meditation for seven days. A cremation ceremony, presided over by Jangtse Chöje Rinpoche, was held at Deer Park on September 5. On September 15, the cremation chamber was opened, and Geshe-la’s relics were collected and removed.

Geshe-la was one the last surviving masters to receive most of their scholarly training in Tibet, and one of the first such scholars to teach in a Western university. He was Professor Emeritus of South Asian Studies at the University of Wisconsin-Madison, author of numerous scholarly works on Tibetan Buddhism, founding and emeritus abbot of Deer Park Buddhist Center, and a revered Buddhist teacher, with students in every part of the world.

Born in 1923 to a farming family in the Shang principality of the west-central Tibetan region of Tsang, he entered a local Gelukpa monastery, Ganden Chökhor, at the age of eight. When he was eighteen, he moved to Lhasa to join Je College of the great monastic university of Sera. Studying with some of Tibet’s greatest masters, he rose rapidly through the scholarly ranks, and was appointed tutor to an important young tulku, Khamlung Rinpoche. In 1959, shortly before the Lhasa uprising, when H.H. the Fourteenth Dalai Lama stood for his Geshe examination, Geshe-la was chosen to serve as a debate partner, quizzing His Holiness on the Perfection of Wisdom literature. With the Chinese suppression of the uprising, Geshe-la, like the Dalai Lama and tens of thousands of other Tibetans, made the perilous journey to India and exile. He completed his own scholarly studies in Buxaduar, West Bengal in 1962, attaining the very highest rank: Number One Lharampa Geshe.

In the same year, the Dalai Lama requested Geshe-la to accompany three young tulkus to the United States so they could study English. They settled at a small Gelukpa monastery in Freewood Acres, New Jersey, overseen by the pioneer of Tibetan Buddhism in the United States, Geshe Ngawang Wangyal. There, Geshe-la began to learn English and to attract the attention of American students, among them Robert Thurman and Jeffrey Hopkins. In 1967, he was invited by Richard Robinson, founder of the University of Wisconsin’s Buddhist Studies program, to move to Madison. At first, he was a teaching assistant for Prof. Robinson’s literary Tibetan course (a colleague of his, with only mild exaggeration, likened this to having the Pope helping out with a Latin class), but over the course of time he began to teach classes on his specialty, Indian and Tibetan Buddhist philosophy, and to draw increasing numbers of students. He eventually—not without difficulty, given the uniqueness of his training—won a regular faculty position, gained tenure, and was promoted to full professor, his rank when he retired in 1997. Among those fortunate enough to complete Ph.D.s under Geshe-la over the years were Jeffrey Hopkins, James Robinson, Ter Ellingson, Leonard Zwilling, Michael Sweet, Ed Bastian, Roger Jackson, Artemus Engle, A.W. Barber, José Cabezón, John Makransky, John Eppling, John Newman, Beth Newman, David Patt, David Germano, James Blumenthal, James Apple, and Paul Donnelley.

Over his career, Geshe-la published a number of articles and books, usually in collaboration with one or more of his students. His books include a Tibetan-language study guide, Lectures in Tibetan Religious Culture; a translation of a Gelukpa tenet-systems text, Cutting Through Appearances: the Practice and Theory of Tibetan Buddhism (with Jeffrey Hopkins); an overview of Kālacakra traditions, The Wheel of Time: Kalachakra in Context (with Roger Jackson and John Newman); a translation of two important Kadampa Lojong texts, Peacock in the Poison Grove: Two Buddhist Texts on Training the Mind (with Michael Sweet and Leonard Zwilling); a translation of Thuken Losang Chökyi Nyima’s great work of intellectual history, The Crystal Mirror of Philosophical Systems: A Tibetan Study of Asian Religious Thought (with Roger Jackson, Ann Chavez, Michael Sweet, and Leonard Zwilling); his autobiography, Like a Waking Dream (with Paul Donnelley); and five volumes (three thus far published) of his teachings on Tsongkhapa’s magnum opus, under the title Steps on the Path to Enlightenment: A Commentary on the Lamrim Chenmo (with David Patt, Beth Newman, James Blumenthal, and Susan Dechen Rochard). Other works, including his commentary on Tsongkhapa’s masterpiece on Buddhist hermeneutics and Mahāyāna philosophy, The Essence of Eloquence on [Distinguishing] the Provisional from the Definitive (Drang nges legs bshad snying po), will be forthcoming.

As successful as Geshe-la was in the Western academic setting, he was even more renowned among Tibetan scholars, especially but not solely in the Geluk tradition. His Tibetan students have included Geshe Jampa Tekchok, Geshe Lobsang Tsering, Geshe Losang Dönyö, all of whom later became abbots of Sera Je monastery in India; two lamas well known to Westerners, Thubten Yeshe and Thubten Zopa Rinpoche; the founder of Maitripa College, Yangsi Rinpoche; and Khensur Lobsang Tenzin, ex-abbot of Gyume Tantric College, who is currently the Jangtse Chöje—directly in line to become Ganden Tripa, holder of the throne of Tsongkhapa. When the Dalai Lama met with the Trappist monk and writer Thomas Merton on Merton’s ill-fated trip to Asia in 1968, he told him that if he wanted to understand Madhyamaka philosophy, he should study with Geshe Sopa.

Geshe-la also was an important figure in the introduction of Tibetan Buddhism to the United States. Paralleling his career at the University of Wisconsin was his development of what now is known as Deer Park Buddhist Center, a fully functioning, traditionally-oriented Tibetan-style monastery in Oregon, Wisconsin, that has served both Tibetans and Westerners in important and diverse ways over many years. For decades, Geshe-la himself taught regular Sunday classes on foundational texts and special summer sessions on difficult Buddhist philosophical topics, and at one time or another the monastery has hosted teachings and/or initiations by nearly every luminary of the Geluk tradition. Most notably, the Fourteenth Dalai Lama has visited Deer Park on multiple occasions, including in 1981, when he bestowed there the first Kālacakra initiation ever offered in the West, and 2008, when he consecrated the magnificent new temple at Deer Park that Geshe-la envisioned, then saw tirelessly to completion in his later years. Geshe-la also traveled often to teach, making frequent visits to various parts of the U.S., as well Mexico, Taiwan, Europe, and other locales.

Last, but far from least, Geshe-la was a peacemaker and public servant. He was actively involved in Buddhist dialogue with other religions, and was a trustee of the International Peace Council, an interfaith organization that promotes peaceful resolution of differences. In that capacity, he traveled to Belfast, Jerusalem, and Chiapas, Mexico as part of Peace Council projects working to end violence in those areas.

His many students and admirers will miss Geshe Sopa’s warmth, intelligence, modesty, energy, and humor — not to mention his lifelong embodiment of his monastic name: effortless patience (lhun grub bzod pa). His legacy lies not just in his scholarly and institutional good works but in the example of a life lived in the pursuit of wisdom and service to others. As Tibetan tradition expresses it at such moments: may he quickly take rebirth so as to continue his work for sentient beings.