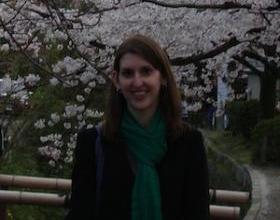 Graduation Year:
2006
Current city:
Madison
Current state/province/country (if outside US):
WI
What have you done since graduating from UW-Madison?:

I worked at Epic in Verona, WI doing software quality assurance for a couple years before deciding to pursue my master’s degree in Intercultural Relations at Lesley University in Cambridge, MA. After one year as a full-time student I was offered a position as the Program Manager of the MIT-Japan Program. I worked there for a few years setting up student internships in Japan and coordinating Japan-related events on campus. I returned to UW-Madison in December 2011 to be the Assistant Director of the new International Internship Program. I advise students on internships abroad and work with host organizations to promote cultivated opportunities and place students.

Language(s):
Japanese
What motivated you to study this/these languages?:

I studied French throughout middle and high school and started Japanese at West High School in Madison as a sophomore. I became really interested in Japan through manga and anime when I was starting high school. I voraciously studied the language and watched, read, and listened to any Japanese things I could get my hands on. I studied abroad in Toyota, Aichi for a summer when I was 16 and then spent a year at a high school in Sakura, Chiba when I was 18. I got to take intermediate Japanese at UW-Madison as a high school senior and ended up staying here for my degree.

I have met amazing people and had fantastic opportunities as a result of studying Japanese. I still keep in close touch with my host family in Chiba; they have visited Madison and I see them whenever I am in Japan. If I did not have the solid Japanese language skills I honed at UW-Madison I would not have gotten the job at MIT. I was especially grateful for having done the technical Japanese program through Engineering Professional Development – it gave me a very useful vocabulary for working with science & engineering internships.

What is your favorite word or phrase in a language you know?:
微妙 (bimyou). It’s hard to translate because it can be used in so many situations, but it’s “subtle” or “sort-of” or “ish”. It’s a word (along with 懐かしい (natsukashii) – nostalgic) that I constantly want to use when speaking in English.