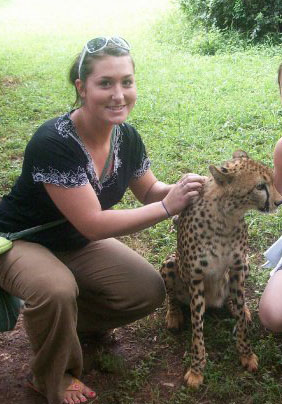 Graduation Year:
2012
Current city:
Cape Town
Current state/province/country (if outside US):
South Africa
What have you done since graduating from UW-Madison?:

I moved to South Africa.

I’ve loved Spanish since I first started learning it in 7th grade, and did some of my first international traveling to various Spanish-speaking countries. The Latin-American world was my first cultural love. But, having said that, I’ve always had a burning desire to learn as much as I can about the entire world and all of the people in it. While still in high school, I attended a leadership conference centered on the workings of the UN, from that point on I made it a goal of mine to learn the six languages of the United Nations, so Arabic and Chinese were quickly added to my list! I spent the summer after high school studying Arabic in Amman, Jordan, and continued with it upon returning to Wisconsin.

Studying languages has meant everything to me. Personally, academically and professionally, Arabic has become my main language of focus, and it has shaped everything about my life thus far. My summer spent in the Middle East taught me a love of the Arab language, culture, history and people. I became fascinated with everything Middle Eastern – music, food, fashion, etc. This fascination has lead me to additional trips to the Middle East, to study abroad in both Israel and Morocco, and my interest in the Arab-Israeli conflict.

What is your favorite word or phrase in a language you know?:
العمود الفقري [al-3amuud al-faqri] (“spine” in Arabic). It is a fairly random bit of vocabulary, but fun to say! Also, I learned it from a very entertaining bus driver while in Jordan.