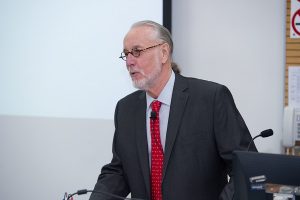 After 47 years on the UW-Madison faculty, William H. Nienhauser, Jr. (倪豪士), Halls-Bascom Professor of Chinese Literature, has announced his retirement at the end of the semester.

The department would like to recognize his service with a collection of well wishes! We hope you will share fond memories, comments and pictures by Monday, June 1st, 2020.

The Department of Asian Languages & Cultures looks forward to celebrating this achievement when we are once again able to hold in-person gatherings.

Nienhauser was promoted to Associate Professor in 1979, then achieved the rank of Full Professor just four years later in 1983. He served as Chair of the Department of East Asian Languages and Literature four times: 1980-1982, 1987-1990, 2004, and 2012. From 1981 to 1985 he was Chair of the Council on Chinese Studies, a predecessor to the current Center for East Asian Studies. In 1995 he was appointed Halls-Bascom Chair, among the most coveted professorships available to faculty at the University of Wisconsin-Madison, which includes a annual research stipend Professor Nienhauser uses to strengthen the community of Sinologists in Germany, China, Singapore, Taiwan, and the United States. Alongside an unbroken tenure at UW-Madison since 1973, Professor Nienhauser has had visiting appointments during research leave at National Taiwan University (1983, 1985-87), Academica Sinica (Summer 1993), Kyoto University (Fall 1999), Peking University (Spring 2008), Capital Normal University in Beijing (Summers 2009, 2010), Nanyang University in Singapore (Spring 2012), Nanjing University (Summers 2016, 2017), the University of Munich (Dec 2017-Jan 2018), and the Elling O. Eide Center in Sarasota (Nov 2018, Nov 2019).

Nienhauser has cultivated a long-standing relationship with German Sinologists, often inviting them to UW-Madison on prestigious German grants. This began with Professor Helmut Martin of Bochum University, hosted during academic year 1984-85 as a Carl Schurz Visiting Professor. The following year Nienhauser hosted his first of three German postdoctoral students, all Feodor-Lynen Fellows on funding from the Alexander von Humboldt Foundation. To date, the Humboldt fellows at UW-Madison include: Wilfried Spaar of Bochum University (1985-87), Hans Georg Möller of Bonn University (2001-02), and Marc Nuernberger of the University of Munich (2012). Professor Nienhauser was awarded a Lifetime Research Prize from the Humboldt Foundation in 2003.

Nienhauser founded the highly regarded specialist journal Chinese Literature: Essays, Articles, Reviews (CLEAR) in 1979 and served as its editor until 2013. The University of Wisconsin-Madison continues to this day to host the editorial office of the journal, which has offered our graduate students extraordinary opportunities to gain exposure and experience in working with professional academic writing in their field of study.

Nienhauser has served as author or editor of 22 academic books, with two more forthcoming in 2020. The first was Liu Tsung-yüan (New York: Twayne, 1973), co-authored with Charles Hartman, Jan W. Walls, William B. Crawford, and Lloyd Neighbors. The most recent is The Grand Scribe’s Records. Vol. 11: The Memoirs of Han China IV (Bloomington: Indiana University Press, 2019). Nienhauser is perhaps best known, alongside his editorship of CLEAR, for two major multivolume sets that will long stand as foundational resources for the study of classical Chinese texts.

The first of these is the two-volume Indiana Companion to Traditional Chinese Literature (Bloomington, Indiana: Indiana University Press, 1986, 1988), an encyclopedic dictionary of terms, key figures, and texts that will remain a leading international resource on Chinese literature for the foreseeable future. Nienhauser was editor and compiler of the Indiana Companion.

The second series is perhaps the most ambitious research project attempted in the history of English-language Sinology: a more than ten-volume translation of the first century BCE history of Chinese civilization’s first 2500 years, the Shiji史記, or more properly, the太史公書, which Nienhauser renders The Grand Scribe’s Records. He serves as editor and co-translator for the series, also with Indiana University Press. The first publication in this series came in 1994 with Volumes 1 and 7. Volume 2 was released in 2002, Volume 5 (Part 1) in 2006, Volume 8 in 2008, Volume 9 in 2010, Volume 10 in 2016, and Volume 11 in 2019. Revised editions of Volumes 1 and 2 were released in 2018, and a revision of Volume 7 is due out in 2020. Volumes 3, 4, and 6 are in process and will be published in the coming years. Professor Nienhauser has run what he calls the “Sinological Circle” in connection to this translation project, an informal group of graduate students from UW-Madison as well as a significant number of well-established Chinese academics, postdocs, and dissertators, many of whom are supported by grants to study “American Sinology.”

Last year, an international literature conference hosted by Nanjing University, Professor Nienhauser was recognized for his career. At a special ceremony on Friday, May 24, Nanjing University leaders gave Professor Nienhauser the new title of adjunct professor, recognizing his years of work to translate into English and annotate a key text in Chinese literature, the Shiji (史记), or The Grand Scribe’s Records, which dates to about 100 BCE.

The evening before the literature conference, Nanjing University Press launched a new collaborative re-issuing of the entire translation of the Shiji, working with Indiana University Press, the publisher of the original multi-volume work, which first went to press in 1995.  In addition, Professor Nienhauser was featured prominently in a documentary about the UW–NJU relationship that was shown to an audience of about 100 provincial and university leaders, including a UW–Madison delegation led by Chancellor Rebecca Blank (read more).

In response to growing student demand for courses on classical Chinese culture in recent years, Professor Nienhauser launched an undergraduate class called “Confucius’ Analects,” which has consistently been the highest enrolled course in our department. In Fall 2019 the Analects course had an enrollment of 264 students, nearly double the draw of the closest next contender.

“Liu Pin-k’o chia-hua lu” (“A Record of Adviser to the Heir Apparent Liu (Yu-hsi’s); Fine Discourses”); A study and translation

From ritualization to secularization: The shaping of the “Book of Songs”

Buddhism and the supernatural tale in early medieval China: A study of Liu Yiqing’s (403–444) “You ming lu”

A study of Yuan Zhen’s life and verse 809–810: Two years that shaped his politics and prosody

Penetrating the transformations from the ancient to the present: Ssu -ma Ch’ien’s conception of the Kingly Way in the use of sources for the Hereditary Houses of the Shih chi

The construction and positioning of ‘Chang Lao’: A key to the authorship and contents of the “Hsü Hsüan Kuai Lu”

How a city speaks: Urban space in Chang’an and the construction of Tang Dynasty narratives

Collecting Memories of a Fading Glory: Li Deyu (787-850) and the Transmission of Tang Anecdotes